“VINEYARDS4HEAT” PRESENTED IN THE AREA OF THE PROSECCO SUPERIOR

“VINEYARDS4HEAT” PRESENTED IN THE AREA OF THE PROSECCO SUPERIOR

On November 3rd, around 150 participants, including the administrators of the 15 municipalities of Conegliano Valdobbiadene, European Wine City 2016, interested citizens and young people attended the conference “Vine and Energy: the residues of viticulture and its energy enhancement: comparing experiences and perspectives “, within the framework of the first convention of the festival of wine culture Prosecco Superiore of Autumn.

To begin with, Professor Cavalli showed the relevance of PRO.S.E.C.CO project (sustainable energy production from combustion and compost), explaining the many possibilities offered by the recovery, exploitation and use of biomass arising from wine activity. 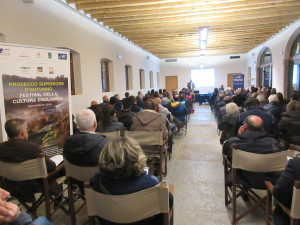 Professor Cavalli illustrated two ways: the production of fuels (wood chips of vine shoots) and composting, with the possibility of crushing in row and biodrainage spot of pruning shoots. Cavalli released the models and studies for the collection points in the territory, in order to create “centers” of compost production: the 15 municipalities of Conegliano Valdobbiadene Prosecco Superiore DOCG together produce an average of 25 thousand tons of vine shoots, 17 thousand of which are available for collection. As for combustion, Cavalli recalled the importance of three factors to achieve sustainable and efficient results: the quality of the fuel, the type of machine used and the good practice of man. A project of great interest, with a comprehensive study but that has not yet been into practice.

That is why it was very illustrative the practical presentation of the project “VINEYARDS4HEAT”, to prove the feasibility of the proposal of the territory. Thus, during the conference the experience of the Penedès, wine and cava area, which has many similarities with the hills of the Prosecco, was demonstrated. Jordi Cuyàs, Coordinator of Strategic Projects of Vilafranca del Penedès City Council, presented the practices reuse for energy purposes of by-products from pruning and fermentation.

With this act, the “VINEYARDS4HEAT” Project has taken an important step in its dissemination in the main wine-growing zones of Europe, by the European network RECEVIN, collaborator of this LIFE. RECEVIN was represented by the General Secretary, Carme Ribes, who underlined the possibilities that networking offered to cities, such as taking advantage of the project’s successes and mistakes and highlighting the importance of the replicability of activities in the wine-growing cities that are part of RECEVIN. Networking is one of the ways to make the EU contribution profitable.

Sign up to our news!
×
Suscríbete a nuestra news!
×
Subscriu-te a la news
×